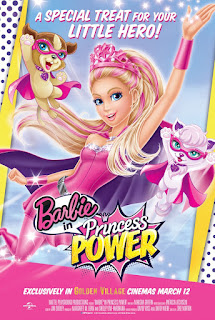 
Barbie plays Kara, a modern princess and carefree. One day, after being kissed by a enchanted butterfly, Kara discovers that has magical powers allowing her to turn into a super princess, a masked flying hero! But her cousin is jealous of Kara's new skills and decide to catch the magic butterfly to transform her into the dark princess. Their rivalry seems to have no limits, but when the kingdom is threatened by a common enemy, the two cousins will work together.